There is no such thing as biodegradable balloons

Biodegradable balloons – do they exist?
You may have seen the big balloon arches when businesses have a celebration, a room “full” of balloons for someone’s birthday or the balloons tied to a fence showing of a child’s birthday party and not thought nothing more of it? Maybe you thought that these balloons are innocent fun, and they will be disposed of safely and soon be degraded in landfill or your backyard compost? You may believe this because you have seen that it says “100% biodegradable” on the balloon packages in the shops.

Balloon packages often advertise them as “100% biodegradable”, with the manufacturers assuring they were made of “100% natural latex rubber”. This implicates that these balloons would have no trouble breaking down in the environment. This appeals to eco-conscious consumers, but just fuels corporate greenwashing — unsubstantiated claims of environmentally friendly and safe products. What most consumers do not realise, is that to shape milky natural rubber latex sap into the product we know as a balloon, many additional chemicals need to be added. These chemicals include antioxidants and anti-fogging (to counteract that cloudy look balloons can get), plasticisers (to make it more flexible), preservatives (to enable the balloon to sit in
warehouses and store shelves for months), flame retardants, fragrance, of course, dyes and pigments. Even more chemicals have to be used to make the additives “stick” to the latex and to stick to each other, enabling them to work in tandem to create a product we expect to use for about 24 hours. So, the balloons cannot be “100% natural rubber latex”.

For decades, the industry relied on ONE industry-funded study from 1989 which claimed that after six short weeks, balloons degraded “at about the same rate as oak tree leaves”. That study was not peer-reviewed, its methods are unclear and not repeatable, and the results are based on only six balloons. Please note that, industrial composting standards require that the material completely disintegrates after 12 weeks, and that the product is not distinguishable from the surrounding soil. In 2020, Morgan Gilmour and Jennifer Lavers conducted research by the Institute for Marine and Antarctic Studies, University of Tasmania. The experiment added a few colourful latex balloons to an industrial compost heap and monitored the progress over 16 weeks. The
results were far from eco-friendly. “After 16 weeks in an industrial compost heap, we unearthed blue and white balloons and found them totally unscathed. The knots we spent hours painstakingly tying by hand more than four months ago were still attached, and
sparkly blue balloons still glinted in the sun.” There was no change in the look or feel of these balloons. This means that there would be more than enough time for wildlife to pick it up and risk entanglement or being poisoned. The American-based non-profit-organisation “Balloons Blow” picked up two balloons in 2011 and did their own “backyard study”. They put the balloons directly onto soil in a garden. The researchers chose this approach as it is difficult to argue that every balloon release ends up perfectly placed into a dedicated compost heap. Five years later, the balloons were still recognisable and had not degraded anywhere near enough to be classified as decomposed.

According to CSIRO, balloons as one of the disproportionately deadliest litter items to marine wildlife such as seabirds and turtles. If a bird ingests a balloon or balloon fragment, it is 32 times more likely to die than if it ingests a hard plastic fragment. Birds and
turtles not only ingest balloons, they actively select them as food. This is because a burst balloon often resembles a jellyfish, the natural food sources of many marine species like turtles. Ingesting balloons, and the clips and strings attached to them, can cause intestinal blockages and results in a slow painful death through starvation. Marine animals don’t have the gastrointestinal pH levels to breakdown a balloon and for turtles, it may also cause floating syndrome. Trapped gases in the gut can cause a turtle to become buoyant, unable to dive for food—making them vulnerable to boat strikes and leading to starvation and severe dehydration.
Next time, you are thinking of purchasing a balloon arch, filling a room “full” of balloons, or tying balloons to your fence to celebrate, please think again. 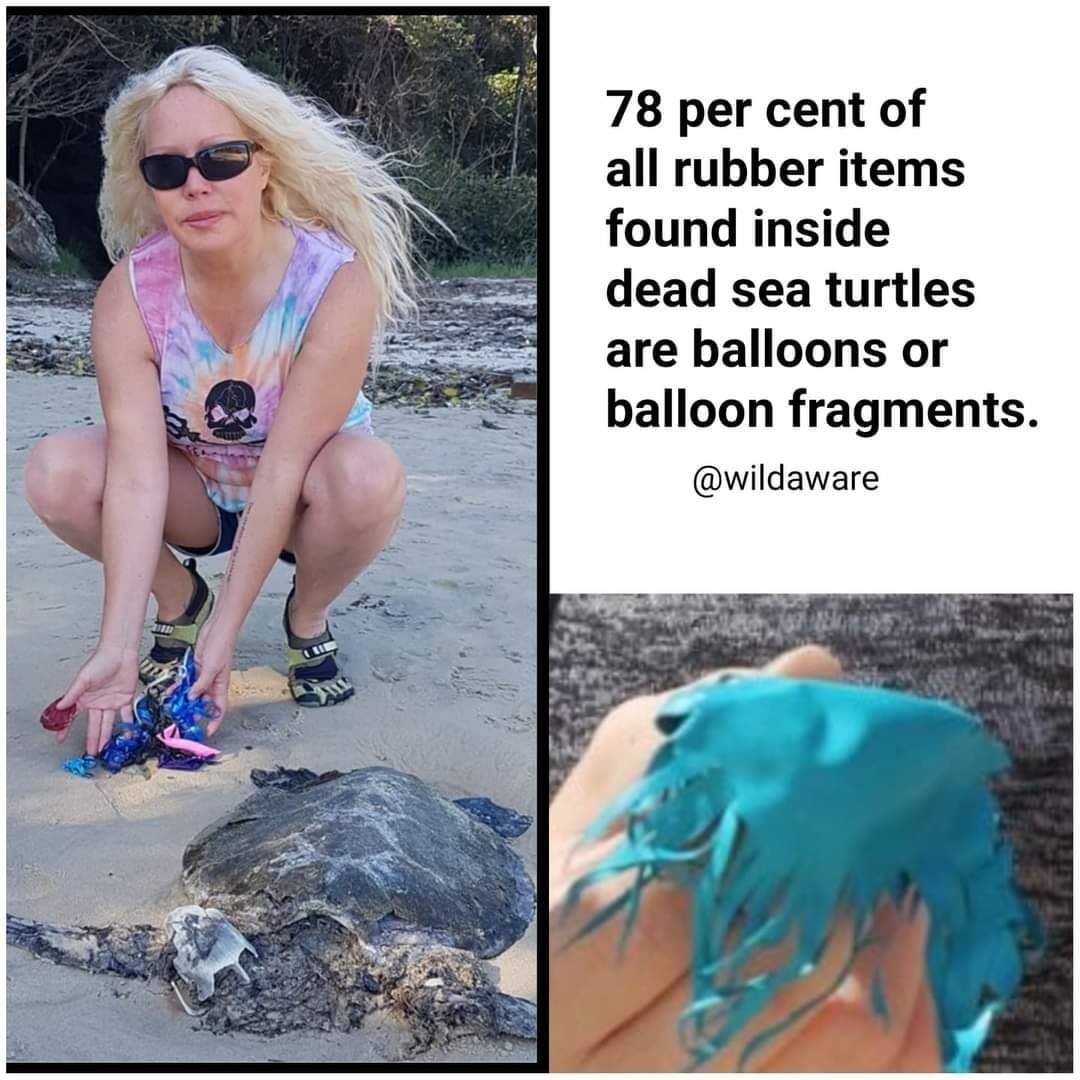